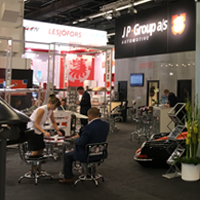 JP Group was also present at the Automechanika in Frankfurt this year. During the five
days of the Fair, more than a hundred customers, potential customers, suppliers and
private visitors visited our Stand. The entire sales department was present this year and
thereby our customers got the opportunity to meet their contacts in person.
There was a lot to see at the Stand. Both new, as well as well-known parts from JP Group Line and
Classic Line could be found in the shelving unit. E.g. Soft-Flex pipes and EGR Valves.
The products from our own production was unconventionally rebuilt and displayed. For instance,
we had a Porsche front transformed into a couch, which attracted much attention and became
a resting place for many visitors. The golf car, which does not belong on the golf course only, but
which also brings out mail, had two coffee machines installed in the trunk, and made several
different coffee specialities for us.
Freshly drained beer from the domestic Viborg could be had at the VW Samba bar. Snacks, in the
shape of Danish cheese and sausage were served when people became a bit hungry.
As is a tradition, there was a party in the Stand Thursday night. In a Danish manner, people had
a good time, relaxed and had something to eat and drink. There were dance and laughter, which is
normal when you are among friends in Denmark.
JP Group wish to thank all customers and visitors, and we look forward to seeing all again in 2020.

The product was added to the cart